This month, the developer behind the popular npm package ‘node-ipc’ released sabotaged versions of the library in protest of the ongoing Russo-Ukrainian War. Newer versions of the ‘node-ipc’ package began deleting all data and overwriting all files on developer’s machines, in addition to creating new text files with “peace” messages. [...]

Popular JavaScript front end framework ‘Vue.js’ also uses ‘node-ipc’ as a dependency. But prior to this incident, ‘Vue.js’ did not pin the versions of ‘node-ipc’ dependency to a safe version and was set up to fetch the latest minor and patch versions instead [...]

The way the Node community works, just blindly slurping in other people’s package updates without knowing what’s in them, continues to boggle my mind.

This isn't just an issue with node/npm by any stretch of the means. Nearly all software supply chains have zero verification and validation involved.

Spotify, Unsurprisingly, Will Remove Neil Young’s Music Instead of Dropping Joe Rogan by John Gruber
Friday January 28th, 2022 at 6:27 AM

With Neil Young having told Spotify that it can keep him or podcaster Joe Rogan but not both, the streaming company today said it will remove Young’s catalog of music.

“We want all the world’s music and audio content to be available to Spotify users,” Spotify said in a statement to Deadline and other media organizations. “With that comes great responsibility in balancing both safety for listeners and freedom for creators. We have detailed content policies in place, and we’ve removed over 20,000 podcast episodes related to COVID since the start of the pandemic. We regret Neil’s decision to remove his music from Spotify but hope to welcome him back soon.”

Spotify represents 60% of the streaming of my music to listeners around the world, almost every record I have ever released is available — my life’s music — a huge loss for my record company to absorb. Yet my friends at Warner Brothers Reprise stood with me, recognizing the threat the COVID misinformation on Spotify posed to the world — particularly for our young people who think everything they hear on Spotify is true. Unfortunately it is not.

Thank you Warner Brothers for standing with me and taking the hit — losing 60% of my world wide streaming income in the name of Truth. [...]

I sincerely hope that other artists and record companies will move off the Spotify platform and stop supporting Spotify’s deadly misinformation about COVID.

This is all good. Of course Spotify chose Joe Rogan over Neil Young. Everyone knew they would, including Young. Young didn’t do this to try to get Spotify to drop Joe Rogan; he did this to raise awareness that Spotify supports Rogan and Rogan pushes a lot of nonsense about COVID. Young put his money where his mouth was and was rewarded with publicity for a message he clearly feels strongly about.

kyounger
reply
Lol. It was all planned this way! 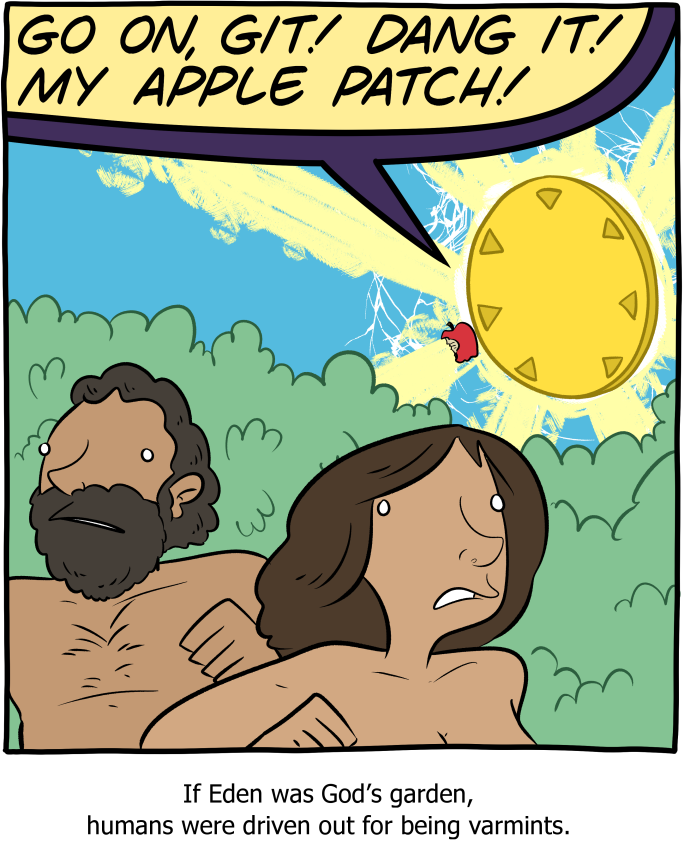 Hovertext:
The Bible never refers to the humans trying to return, so I can only assume He sprayed some effective pesticides.

kyounger
reply
What? The entire story of the Bible is about mankind's struggle in this regard, and how Jesus reconciled that struggle.

timdiggerm
It is a joke.

kyounger
I think the original comic is humorous. It's the hovertext that misses the mark.

timdiggerm
Although I know what you mean from a theological perspective, he's literally correct.

The Federal Trade Commission has endorsed a roughly $5 billion settlement with Facebook Inc. over a long-running probe into the tech giant’s privacy missteps, according to people familiar with the matter.

FTC commissioners this past week voted 3-2 in favor of the agreement, with the Republican majority backing the pact while Democratic commissioners objected, the people said. The matter has been moved to the Justice Department’s civil division and it is unclear how long it will take to finalize, one of the people said. Justice Department reviews are part of FTC procedure but typically don’t change the outcome of a decision by the commission.

I’m still with Kara Swisher on this — add a zero and we might have a fine that will change Facebook. $5 billion is just the cost of doing business.

kyounger
reply
Gruber does not understand what he's saying here. FB had a free cash flow (you can kind of think of this as the economic value they generated) in 2018 of like $15B. This knocked that down by 1/3. $50B would be like 4 years of FCFs. That would be insane.

jdguitard
The point he is trying to drive here is that $5B isn't enough for Facebook to change its stance of not caring for user privacy. It would still leave them with $10B of FCFs... In the end, Facebook won't hurt financially and will keep the same strategy going because it pays off better in the end, regardless of the silly fines. Think of it as the same as a speeding ticket. It may hurt to have to pay one, but it hardly stops anyone from not speeding again, because the fine isn't enough of a financial burden to alter someone's behavior. 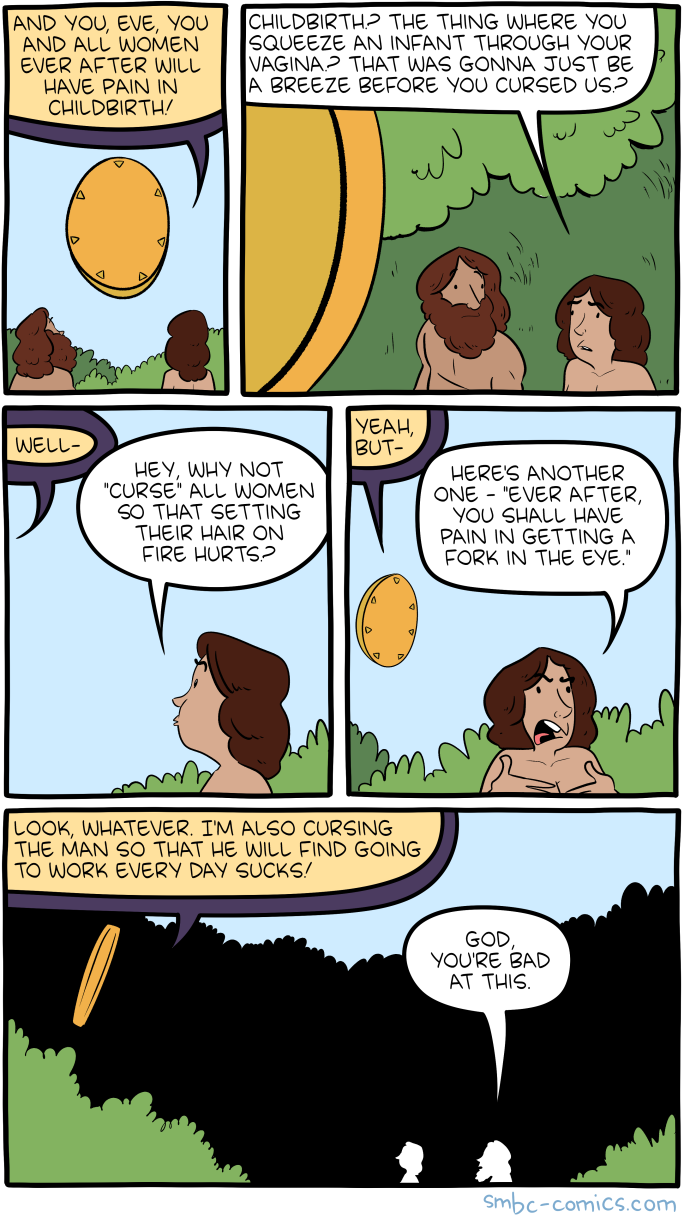 Hovertext:
What if God is just some guy with a cheat-sheet for all of history, and he just pops in from time to time to take credit for weird occurrences?

kyounger
reply
Work by default should be tremendously rewarding. I know the times I'm in the flow of things, I feel like I've lifted whatever curse. Not sure the comic sees it this way.

Here’s the problem with suggesting that upsetting speech warrants “safe spaces,” or otherwise conflating mere words with physical assault: If speech is violence, then violence becomes a justifiable response to speech.

Just ask college students. A fifth of undergrads now say it’s acceptable to use physical force to silence a speaker who makes “offensive and hurtful statements.”

That’s one finding from a disturbing new survey of students conducted by John Villasenor, a Brookings Institution senior fellow and University of California at Los Angeles professor.

Even worse, a large segment of them fundamentally do not understand the First Amendment:

For example, when students were asked whether the First Amendment protects “hate speech,” 4 in 10 said no. This is, of course, incorrect. Speech promoting hatred — or at least, speech perceived as promoting hatred — may be abhorrent, but it is nonetheless constitutionally protected.

This notion equating speech with violence is more than just an irritation. It’s ammunition for the right to shut down legitimate protest. It’s self-defeating for people on the left to take this stance. Sticks and stones, folks.

kyounger
reply
The right? Is ammunition for anyone that wants to shut down protest. I'm not seeing him mention Berkeley here at all.

joelowrance
You didn't seriously expect intellectual honesty from him on a political topic did you?

invinciblegod
Did he mean "the right" or a person's right?

peterdoerrie
In the peace and conflict fields of studies, it has been established fact that speech can have similar effects to and contribute to the development of physical violence for decades. Just look at Nazi Germany and the Rwandan Genocide how speech was used to legitimate and instigate violence. Or talk to a victim of hate speech and see the psychological aspects of being on the receiving end of such verbal violence. The U.S. is pretty much alone in the world in not regulating hate speech. You can argue that this is positive "American exceptionalism". I would argue that it is ignorance towards scientific knowledge and human decency.

mcormier
Yeah, I agree with invinciblegod. I don't think he's referring to the political right here but a justification for ones action.